The Department of Gynecology deals with tumors originating from the female genital and reproductive organs. Surgery is the main treatment modality for most gynecologic cancers, but multidisciplinary treatments consisting of radiotherapy and chemotherapy are routinely considered in close cooperation with therapeutic radiation oncologists and medical oncologists. The incidences of three common gynecologic cancers, that is, cervical, endometrial and ovarian cancer, are now on the rise in Japan.

The Team and What We Do

Dr. Masaya Uno joined our staff in April. So, more time can be spent on research as well as medical treatment. The number of surgeries was 284, including 29 cases of radical hysterectomy and 20 cases of para-aortic lymphadenectomy. The number is almost the same as last year, but since last year's total was 15 months, it was about 20% higher. Without major post-operative accidents, these expanded operations are performed safely and reliably, and true minimally invasive treatment continues.

For ovarian cancer, which is difficult to diagnose early and has a poor prognosis, we have succeeded in creating a diagnostic model that detects ovarian cancer with higher accuracy (99% sensitivity, 100% specificity). A total of 4,046 microRNAs in blood (serum) with and without ovarian cancer were comprehensively analyzed to identify multiple microRNAs that significantly change in ovarian cancer. By combining ten microRNAs, ovarian cancer can be detected from an early stage. This research is in collaboration with the laboratory of molecular cell therapy (Nature Communications). 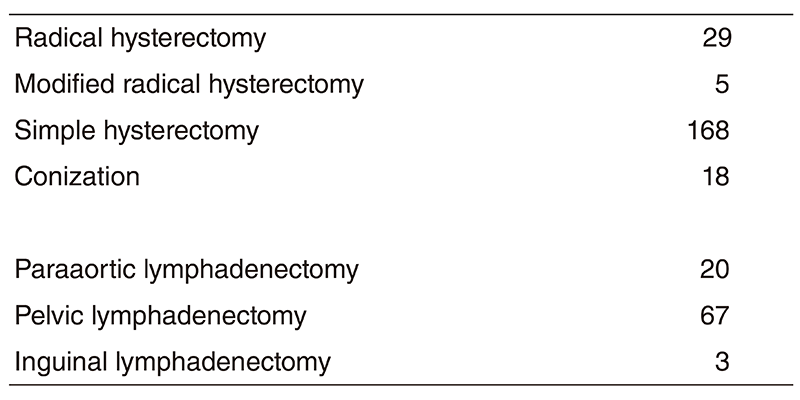 1) A nonrandomized confirmatory trial of modified radical hysterectomy for patients with FIGO Stage Ib1 (< 2 cm) uterine cervical cancer (JCOG1101) is complete and follow-up is in progress.

2) A non-randomized verification study regarding selection of fertility-sparing surgery for patients with epithelial ovarian cancer (JCOG1203) is ongoing as planned.

5) A randomized phase III trial to confirm the survival effect of para-aortic lymphadenectomy for patients with endometrial cancer (JCOG1412) has started.

The application to include (Robot-assisted) laparoscopic surgery for uterine malignant disease in Japanese medical insurance was made. A doctor who meets facility requirements and surgeon requirements will join our department in April. We are pursuing "realizing true minimally invasive surgery" and "the enforcement of radical surgery safely", and are collaborating with the Research Institute to overcome existing treatment outcomes.